{The window display that teased us all night}
At 10:30pm on Friday night, Joanne and I went to camp out at the Lanvin x H&M launch in Vancouver. Yes, you heard right: 10:30pm. We initially hadn’t planned on going until 3 or 4AM, but a tweet that informed me that there were already people there at 4PM alarmed us a little so we went much earlier than planned. It was freezing and a blizzard was expected that night, but when we got there easily 30 people were already ahead of us. Tents, chairs, air mattresses: you name it and they were present. We set up camp with nothing but our ugly down parkas, a thin sleeping bag (which my boyfriend told me to bring last minute, thank goodness) and hopeful attitudes, then sat, sat and…. sat. About an hour later it started snowing… hard. The hired security guards handed out red H&M umbrellas to the crowd and so our side of the street looked like a sea of scarlet. And so we continued to wait, with lots of passerbys (many intoxicated) asking us what we were waiting for, following up the question of whether we were seriously lining up for clothes after our response. After a few of those, nobody in line bothered to answer anymore and it probably appeared that this bunch of poorly dressed (guess it can be attributed to the cold), retail-crazy individuals were more than a little bit rude.

{Around 3AM… chatting with the bf to pass time}

It took a while, but morning did end up coming and finally the wristbands were handed out. After accounting for late coming line-budgers we were to be the 3rd group in: 8:40AM. Immediately after receiving our wristbands we went to Tim Horton’s and warmed up for 1.5 hours, trying our best not to fall asleep. At 8:15 we decided to check out the men’s section, which was basically a free for all, to scope out items for our guys. We were shocked to see that there were literally only a handful of the blue shirts and 3 brown newsboy hats left, along with a few “scarves” (if you could call them that). I guess they underestimated the men! From what I heard, the sunglasses were the first to go and were by far the most sought after item.

At 8:30 we headed back to the fenced off women’s section and eagerly waited our turn to go in. Aside from an annoying bunch of Chinese girls behind us who kept giving us dirty stares to check if we had the magic tickets under our sweater-covered wrists (I moved my hand up to see if they really were, and sure enough their eyes followed like a dog following a treat) and who later pushed past us to enter, the long awaited 15-minute experience inside went pretty smoothly as a whole.

And what did I end up with? The coveted red statement necklace and earrings, plus the ruffled skirt in both colours (still deciding whether to keep one or both). I had my heart set on the leather gloves but no such luck: only one pair left in size large. I regret not getting the cascading ruffle dress because it was 100% silk and actually quite good quality but I just couldn’t justify the hefty $200 price tag, even if it was sort of “Lanvin”. As for the yellow dress that I so admired, I didn’t even end up trying it on! Looking back, I think I was just too tired from a night of zero shut eye to think clearly. 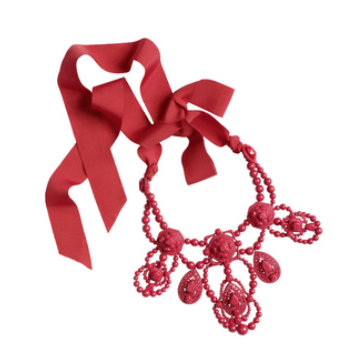 {one of my precious spoils of war!}

Will I do it again? As I told Joanne, only in the unlikely events that Valentino Garavani or Oscar de la Renta were to ever do a collection (or if Alber Elbaz decides to grace us with another one). And if that were to ever happen, I would probably be one of those crazies with a tent set up and foldable chairs in hand. It’s important to be prepared! Thanks bestie for being crazy with me!

Ironically, my favourite purchase yesterday was a non-Lanvin-for-H&M related piece with a gorgeous gold and black brocade print perfect for the holidays (for a mere fraction of the cost of a Lanvin dress, nonetheless). Click here to see a preview. Now to find a place to wear it to!

Note: Sorry for the lack of photos in this post, especially in store! Again, I was just too tired after getting in. Slept like a dog from 11AM all the way through to 6PM on Saturday.
Previous Post: « Elements
Next Post: Punch of Coral »